Posted by Jan Bergmans on June 30, 2012
Posted in: Uncategorized.

Posted by Jan Bergmans on June 27, 2012
Posted in: Uncategorized.

I AM is a 2011 documentary film written, narrated, and directed by Tom Shadyac. The documentary explores Shadyac’s personal journey after a 2007 bicycle accident, “the nature of humanity” and “world’s ever-growing addiction to materialism.” The film, shot with Shadyac and a team of four, contrasts sharply with Shadyac’s previous comedic work.
Shadyac had suffered post-concussion syndrome after a 2007 bicycle accident in Virginia, experiencing months of acute headaches and hyper-sensitivity to light and noise. The injury followed the cumulative effects of previous mild head injuries Shadyac had suffered surfing, mountain biking and playing basketball.
A 2011 New York Times article stated that: “the symptoms of a concussion [didn’t] go away. Something as simple as a trip to the grocery store was painful for Shadyac, whose brain was unable to filter various stimuli.
After medical treatments failed to help, he isolated himself completely, sleeping in his closet and walling the…

Posted by Jan Bergmans on June 27, 2012
Posted in: Uncategorized. 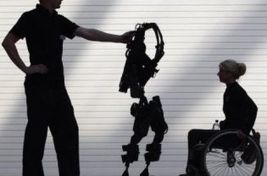 Potsdam, Germany. “It’s a nice feeling to be upright, to walk and to have people at eye level,” said a beaming Peter Kossmehl at the Potsdam Rehabilitation Center in Germany.

A Spectacle For My Muse

Posted by Jan Bergmans on June 26, 2012
Posted in: Uncategorized.

Unlike other hosted monitoring systems, PushMon is designed to receive signals from applications, scripts and background jobs. All you need is to call a URL on success. If we do not receive the URL “ping” by the time specified, you will receive an alert via email, IM, SMS, Twitter and/or phone.

Choosing Between Work and Love? The Best Reasons to Hang … – Huffington Post (blog)

Posted by Jan Bergmans on June 26, 2012
Posted in: Uncategorized.

See on Scoop.it – From Film to Internet

Choosing Between Work and Love? The Best Reasons to Hang …Huffington Post (blog)Even though it’s more convenient than ever to stay in touch and communicate, long-distance relationships still have a bad reputation, and we all know couples …

Posted by Jan Bergmans on June 25, 2012
Posted in: Uncategorized.

In what seems like a blow for humanity, a very smart chimpanzee in Japan crushes any human challenger at a number memory game.

After the numbers 1 through 9 make a split-second appearance on a computer screen, the chimp, Ayumu, gets to work. His bulky index finger flies gracefully across the screen, tapping white squares where the numbers had appeared, in order. So far, no human has topped him.

Ayumu’s talent caused a stir when researchers first reported it in 2007 (SN: 12/8/2007, p. 355). Since then, the chimp’s feat has grown legendary, even earning him a starring role in a recent BBC documentary.