1. Black Magic For White Boys will have its world premiere at the TriBeCa Film Festival! Please come join us at the screening!

I play Lucy, the magician’s assistant with constant migraines. Onur is this amazing rollercoaster writer and director who puts the most interesting people together.

“An aging magician is about to lose his small New York theater, but has a devilish plan to save it. A middle-aged man finds his sovereignty in jeopardy when he impregnates a woman he barely knows. A real estate mogul is frustrated that he cain’t raise the rent on his tenants. These characters converge in Tribeca alum Onur Tukel’s bizarre comic tale about testing boundaries, gentrification, and how old New York is fading away.”

2. Centrum Filmowe Krakow presents a retrospective of Edwin Brienen’s films during a three day run, starting on Friday, April 21st. Five feature films be shown, namely Terrorama!, Both Ends Burning, Last Performance, Viva Europa! and God. I am in all of them, except for Viva Europa! I just counted, and I’ve done 16 film/TV projects so far with my director and friend. This retrospective is a special acknowledgement from the Polish film industry to virtuoso director Edwin Brienen. They call the retrospective “Enfant Terrible.”

And here is what you all have been waiting for, the Eva Quiz:

1. What went “wrong” on the European tour of “Almost Mata Hari – Lovers, Letters and Killers”?

A. Not enough crew to carry my suitcases.

B. Too many different light technicians. Some didn’t speak English at all and had a hard time following the cues. Result: A flickering solar eclipse in my show.

C. My wig was stolen by a famous rockstar from White Lake City.

D. Yuri (the sales manager) wanted to add Istanbul, Bulgaria and Romania to the tour, but he drank too much and was arrested by the police in Germanyfor a minor incident. I couldn’t bail him out.

2. Why is the film retrospective called Enfant Terrible?

A. Because it’s French, so it sounds sultry.

B. Because most of the characters in the films had terrible childhoods.

C. Because Brienen breaks all the film rules, and only does what his artistic conscience tells him.

D. Because of sex, violence, rape, playback acts in the middle of dramatic curves and overall insanity.

E. All of the above.

You can win: a candle with a WWI iron cross on it (no, not a swastika) that was used in the show.

The tour was phenomenal.

I really want to thank all my friends and relatives who showed up and came to the show, andhelped me with their talents, their time and their LOVE. I miss you all so much! Here are some pictures of “Almost Mata Hari – Lovers, Letters and Killers.”

Hopefully more shows will follow. Please tell me if you have any leads (theaters, producers, etc.) 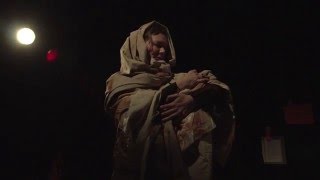