Originally posted on irevuo: “To be an artist you have to give up everything, including the desire to be a good artist.” – Jasper Johns When I was seventeen years old, I kind of figured that I was better at writing than those around me. Had won a few competitions, and all my teachers were…

via How to be a good artist — Cristian Mihai

The Paradox of Art as Work 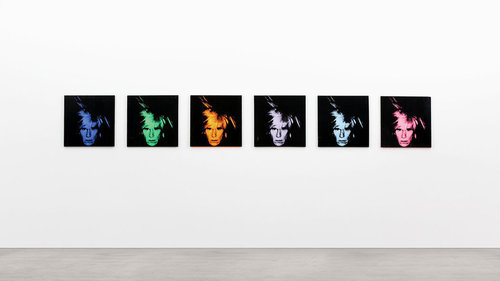 Art is imagined to exist in a realm of value that lies beyond mere economic considerations, but money is a key measure of artistic success.

Art meets commerce: “Six Self Portraits” by Andy Warhol, to be featured in a Sotheby’s art auction; the price is estimated at $25 million to $35 million. Credit Sotheby’s
There are few modern relationships as fraught as the one between art and money. Are they mortal enemies, secret lovers or perfect soul mates? Is the bond between them a source of pride or shame, a marriage of convenience or something tawdrier?

The way we habitually think and talk about these matters betrays a deep and venerable ambivalence. On one hand, art is imagined to exist in a realm of value that lies beyond and beneath mere economic considerations. The old phrase “starving artist” gestures toward an image that is both romantic and pathetic, of a person too pure, and also just too impractical, to make it in the world. When that person ceases to starve, he or she can always be labeled a sellout. You’re not supposed to be in it for the money.

On the other hand, money is now an important measure — maybe the supreme measure — of artistic accomplishment. Box office grosses have long since become part of the everyday language of cinephilia, as moviegoers absorb the conventional wisdom, once confined mainly to accountants and trade papers, about which movies are breaking out, breaking even or falling short. Multimillion-dollar sales of paintings by hot new or revered old artists are front-page news. To be a mainstream rapper is to have sold a lot of recordings on which you boast about how much money you have made selling your recordings.

Everyone might be sure that sales are not the only criterion of success, but no one is quite certain what the others might be, or how, in our data-obsessed era, they might be measured.

In the popular imagination, artists tend to exist either at the pinnacle of fame and luxury or in the depths of penury and obscurity — rarely in the middle, where most of the rest of us toil and dream. They are subject to admiration, envy, resentment and contempt, but it is odd how seldom their efforts are understood as work. Yes, it’s taken for granted that creating is hard, but also that it’s somehow fundamentally unserious. Schoolchildren may be encouraged (at least rhetorically) to pursue their passions and cultivate their talents, but as they grow up, they are warned away from artistic careers. This attitude, always an annoyance, is becoming a danger to the health of creativity itself. It may seem strange to say so, since we live at a time of cultural abundance and flowering amateurism, when the tools of creativity seem to be available to anyone with a laptop. But the elevation of the amateur over the professional trivializes artistic accomplishment and helps to undermine the already precarious living standards that artists have been able to enjoy.

“Making a living is nothing,” the novelist and critic Elizabeth Hardwick wrote in an essay titled “Grub Street: New York,” first published more than 50 years ago in the inaugural issue of The New York Review of Books.

“The great difficulty is making a point, making a difference — with words.”

She might just as well have said with images, sounds or the movement of bodies; words just happened to be her chosen medium. And her words in this case still stand as a concise, slightly scolding credo for the creative class. Nobody cares how you pay your rent. Your job is to show us something we didn’t know we needed to see.

But it is, nonetheless, a job. The risk in separating the labor of making points and differences from its worldly reward lies in losing sight of the fact that it is labor, and therefore has a value that is material as well as abstract.

In March, the National Endowment for the Arts released a report estimating that more than two million American workers identified themselves as artists, and noted that they had, since 2008, undergone the same bumpy, piecemeal recovery as other workers.

An earlier report, from 2011, calculated that “the production of arts and cultural goods and services contributed $504.4 billion to the U.S. economy,” or 3.25 percent of gross domestic product.

It may be relevant to note that the single largest category of artistic endeavor was advertising — a sign, perhaps, that the distinction between art and commerce is finally moot — but the upshot is that what artists do represents a significant quantifiable share of the nation’s wealth.

The question of who profits and who gets paid has become a contentious one.

The cultural economy has always been mixed — a volatile blend of bazaar, bureaucracy and medieval court. Some parts of it appear, at least at first glance, to function by the rules of the free market.

In reality, of course, this activity — represented by quaint, in some cases obsolescent institutions like the bookshop, the record store and the movie theater — has been governed by a complex web of middlemen and corporate players: agents, producers, movie studios, publishing houses, record companies and so on.
That capitalist enterprise zone exists alongside, and in practice frequently overlaps with, a realm of patronage.

Individual artists subsist on grants from foundations and the government, which along with corporations and wealthy donors support the institutions that bring those artists’ work to the public.

When you buy your ticket and walk into a museum, a regional theater or a symphony hall, the experience you are purchasing has been subsidized by the philanthropists whose names are listed in the lobby.

And nearly every artist who makes a living (perhaps outside of advertising agencies) does so in this nexus of peddling and patronage.

The recently published anthology “MFA vs. NYC” proposes, in its title, a dichotomy between the two dominant models of literary careerism: the subsidized route of graduate school and teaching, in which writers support themselves through paid activities other than writing; and the rough-and-tumble marketplace of New York City, where writers more or less do the same thing but with a different attitude. New York, as the headquarters of the publishing industry, the domestic art market and segments of the television and movies businesses, shines with the credentializing luster of capitalism.

Of course, making it here is costly enough to require other forms of paying work, or parental subsidy. The academy offers a degree of security, along with time and space to work, but can also be, in the age of the adjunct instructor, a place of alienation and exploitation.

The argument that threads through many of the essays in “MFA vs NYC” is that both creative business models are, in the jargon of the moment, being disrupted, as technological and economic forces combine to exert downward pressure on writers’ incomes.

The signs of this disruption are not hard to find. Magazines that once paid by the word and employed healthy rosters of staff writers are now recruiting readers to contribute articles, offering to compensate them with exposure and “prestige.”

Digital music services like Pandora and Spotify pay minuscule royalties to artists whose songs they stream.

Meanwhile, in the nondigital domain of musical performance, symphony orchestras and opera companies have undergone several seasons of labor trouble, as managers from Minnesota to the Metropolitan Opera cite sluggish ticket sales and stagnant endowments and try to wrest salary and benefit concessions from unionized rank-and-file musicians and singers.

“Everything is free now,” the folk singer Gillian Welch sang in 2001, reacting prophetically to the threat of Napster.

Everything I’ve ever done
Gonna give it away

Someone hit the big score

They figured it out

We were gonna do it anyway

Even if it didn’t pay.
In the years since, the big score has been realized by technology and social media companies, which have enticed users to generate content for nothing. “If there’s something that you want to hear/You can sing it yourself,” Ms. Welch sang.

The subsequent history of the Internet has turned this “Atlas Shrugged”-like idea on its head, enshrining democratic amateurism as a cultural norm and a Utopian possibility. We can all do it anyway — make our own videos and songs, write our own poetry and personal essays, exhibit our paintings and our selves — even if it doesn’t pay.

Digital amateurism also sells itself as an alternative route to professional riches. Competitive reality television, Kickstarter campaigns and cooperative self-publishing ventures offer the lure of fame and fortune accomplished without the usual middlemen.

The result is, or threatens to become, a stratification that mirrors the social and economic inequality undermining our civic life.

A concentration of big stars, blockbusters and best sellers — Beyoncé, “The Avengers” and their ilk — will sit at the top of the ladder.

An army of striving self-starters will swarm at the bottom rungs, hoping that their homemade videos go viral, their self-published memoir catches fire or their MFA thesis show catches the eye of a wealthy buyer.

The middle ranks — home to modestly selling writers, semi-popular bands, working actors, local museums and orchestras — are being squeezed out of existence.

The middle — that place where professionals do their work in conditions that are neither lavish nor improvised, for a reasonable living wage — is especially vulnerable to collapse because its existence has rarely been recognized in the first place.

Nobody would argue against the idea that art has a social value, and yet almost nobody will assert that society therefore has an obligation to protect that value by acknowledging, and compensating, the labor of the people who produce it.

And artists themselves, outside of unionized industries like television and movies, are unlikely to perceive defending the value of what they do as an interest they hold in common. But it is not necessarily in their nature to be any more individualistic or competitive than anybody else, and they may have a lot to teach the rest of us about the meaning of work. If the supposedly self-involved members of the creative class can organize to assert some control over what they make — the magical stuff now routinely referred to as “content” — then maybe other residents of the beleaguered middle might be inspired by their examples.

This is true of our clothes and our food, and it is no less true of those products we turn to for meaning, pleasure and diversion.

We will no doubt continue to indulge all kinds of romantic conceits about artists: myths about the singularity of genius or the equal distribution of talent; clichés about flaky, privileged weirdos; inspiring tales of dreamers who persevered. But we also need to remember, with all the political consequences that this understanding entails, that they are just doing their jobs.

The role of the artist’s muse

As Far As Longing Will Reach

Too Busy To be An Artist ?