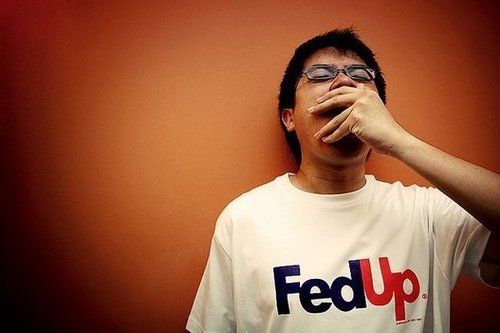 You are everything I aspire to be.

Back. I had to go and check what “bored” meant, just in case the definition had changed in recent months, but no! It’s the same! In essence, you’re saying you have run out of things to do that are worthy of interest. Which is just an incredible place to be.

HOW YOU MUST HAVE LIVED.

I mean, by being bored, you must have…

Eagerly delved into everything Stanford, Harvard and Yale are offering up on iTunes, entirely for free…

…and then filled any gaps with Academic Earth and Khan Academy.

…and then did the same with Chez Pim‘s output – with enormous emphasis on the Pad Thai.

Backed up every single photo and critical document you own…

…and then did it again, elsewhere, because you never know when the badsectorpocalypse will strike…

…and even went as far as protecting all your precious bookmarks & settings on your favourite apps by going portable and sending a backup a copy to your USB or cloud drive?

Read all The Morning News, then all of World Hum, then every scrap of archived material from Brain Pickings, rounding things off with the Paris Review. (Well done. You’ve read some of – and read about some of – the best writing on the Internet. Admirable way to spend a couple of decades. I applaud your dedication).

Read Lord Of The Rings yet again, except following the route in Barbara Strachey’s Journeys of Frodo (which can be previewed here because someone’s scanned them, but really, the book is a toe-wiggling joy – but you know that, having bought it, right?).

…and followed it up with a substantial dollop of TED-watching.

Grasped the fundamentals of the 6,000+ living languages of the world.

Successfully learned to do all 50 of these things…

…and then somehow, against staggering odds, managing to fight your way through all 50 of these.

Read this trilogy, while following the real history of Newton, Liebnitz, Hooke, Louis XIV, William II and all of Stephenson’s “characters” in a real history-of-science book (say, this one), and pinpoint exactly where Neal Stephenson has stuck to the facts and where he has taken wild, anachronistic flights of fancy.

Mapped yourself silly with the help of the incredible Strange Maps, GeoCurrents and BIG Map Blog.

Read Nieman Storyboard until you learned how stories work…

…and then written at least as many fiction and non-fiction books as Isaac Asimov.

Sat outside and listened to the world – the birds, the weather and the bustle of humanity, the creak of your chair, the sound of your own breathing – until everything held absolutely zero novelty or interest for you. Been there? Done that? WOW.

Learned to recite and draw the RCA Animates from memory.

Read, and more importantly thunk deeply about, all the Change This manifestos.

Addressed every lingering guilty regret, until you were satisfied you’d done absolutely everything you could to make amends, no matter how belatedly.

And finally (because it’s important to have a sense of proportion here) – you’ve followed every single link in every single issue of Zunguzungu‘s Sunday Reading series.

I mean, there’s other stuff – but let’s face it, doing these things really ate up your free time. You’re allowed a little slack!

And I don’t want to sound unreasonable, of course. Or bitchy.

Anyway, I’ll let you get back to being bored.

Because you, my friend, deserve it.