Drone With Bubble Machine Can Pollinate Flowers Like a Bee

The tiny biological machines that farms rely on to pollinate the flowers of fruiting plants have been having a tough time of it lately. While folks around the world are working on different artificial pollination systems, there’s really no replacing the productivity, efficiency, and genius of bees, and protecting them is incredibly important. That said, there’s no reason to also work on alternate methods of pollination, and researchers at the Japan Advanced Institute of Science and Technology (JAIST) have come up with something brilliant: pollen-infused soap bubbles blown out of a bubble maker mounted to a drone. And it apparently works really well.

Most other examples of robotic pollination that we’ve seen have involved direct contact between a pollen-carrying robot and a flower. This is a workable method, but it’s not at all efficient, requiring the robot to do what bees do: identify and localize individual flowers and then interact with them one at a time for reliable pollination. For a couple of flowers for a demo, this is workable, but the problem becomes scaling it up to cover even a single tree, let alone an entire orchard.

Miyako and coauthor Xi Yang experimented a bit, leading them to include this lovely sentence in their published paper:

We accidentally found that natural pollen grains can be easily incorporated into a soap film and flown in the air using various bubble devices.

Testing showed that 4 mg of pollen per mL of 0.4 percent surfactant solution resulted in soap bubbles that were each carrying up to 2,000 individual grains of pollen, stuck to the surface of the bubble membrane. The researches were also able to optimize the pH, and mix in boron, calcium, magnesium, potassium, and a few other things in the bubble solution to make it as pollen-friendly as possible, and showed that pollen grains within the solution were able to germinate successfully.

The real test, of course, is whether you can actually use a soap bubble to pollinate a plant, and how well it works compared to other methods. Initial experiments on pear trees, using a handheld bubble gun targeted at specific flowers, went so well that the researchers seem to have been in disbelief:

Surprisingly, after shooting the soap bubbles onto the targeted flowers, young fruits formed after 16 days at a volume that was almost the same as that of conventional hand pollination with a spherical feather brush. The volumes of pear fruits obtained over time increased steadily and exhibited the same swelling tendency as that of flowers pollinated after 16 days. Moreover, the rates of both soap-bubble-mediated pollination and hand pollination were approximately 95 percent, and no significant differences were observed between them. Apparently, such results demonstrated that soap bubble-mediated pollination is effective not only for the expression of fertility of pollen grains but also for the substantial production of pear fruits.

To show that this technique was scalable, the final goal of this research was to perform robotic pollination on a larger scale using a drone with a sort of bubble machine gun (capable of generating 5,000 bubbles per minute) mounted underneath. In order to manage the downwash from the drone’s rotors, the researchers mixed a stabilizer into the bubble solution, which was so effective that some of them stuck around for 5 hours. These bubbles were smaller, and only carried about 300 pollen grains each, but if you’re generating nearly a hundred bubbles per second, that’s still a lot of pollen. And the researchers observed that it only took one single bubble landing on the pistil of a flower to result in pollination, with an overall success rate of 90 percent when the drone moved over flowers at a respectable 2 m/s at a height of 2 m.

The primary limitation at this point seems to be that the surfactants used to make the bubbles, while biocompatible, aren’t as eco-friendly as they could be. But edible bubbles are already a thing, and the researchers want to try to get those to work next. They also point out that the drone technique would need some refinement in localization and mapping and control to be commercially useful, but I think we can forgive them for that, right? If you want to learn more, the entire paper is available online right here.

Flying high above Vegas with the DJI Phantom 2 Vision+ drone 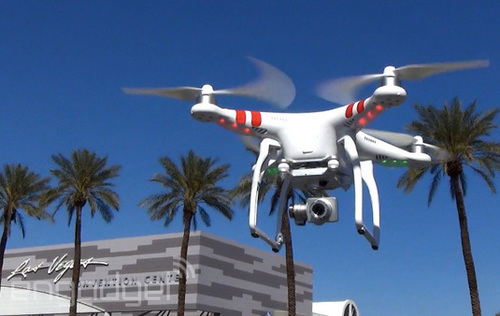 There’s been a lot of killer gear here at NAB, from Sony’s Alpha A7s to the Blackmagic URSA. But of all the gadgets that debuted in Vegas this week, I’m

There’s been a lot of killer gear here at NAB, from Sony’s Alpha A7s to the Blackmagic URSA. But of all the gadgets that debuted in Vegas this week, I’m most obsessed with DJI’s Phantom 2 Vision+ drone. This year’s version represents a significant boost over 2013’s model, due to one brilliant feature: a three-axis gimbal. The flying craft sports an integrated 1080p camera that can shoot solid stills and video alike, but the gimbal adds serious stabilization, keeping footage impossibly still, whether you’re flying at 30MPH, caught in a gust of wind or simply hovering above the ground. The built-in GPS and compass keep the device on track at all times, letting you focus not on staying aloft, but on getting the shot.

Camera-equipped drones are a dime a dozen these days, but assuming you have the $1,300 to burn, DJI’s Vision+ is the one you want. The autonomous features at play here enable very stable footage, while the intuitive control and Android and iOS apps make it easy to fly and get the shot, without any experience at all. The drone can shoot and fly for 25 minutes on a single charge, and while climbing can use a bit more power, you can move left and right all you want without accelerating drain. The camera, designed in-house by DJI, captures to a microSD card. You get a live preview from the app, though, making framing a shot, changing modes and snapping still photos a breeze. Take the Vision+ for a spin in our video below, complete with some fantastic aerial footage of the Vegas skyline.