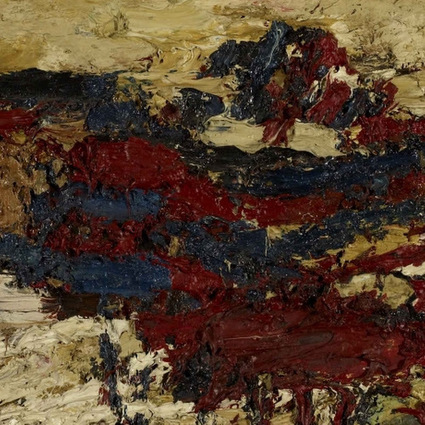 Following in a tradition of special displays of works by artists inspired by the Rijksmuseum’s world famous collection of Dutch Masters, six paintings by Frank Auerbach will go on show in dialogue with works by Rembrandt in the Gallery of Honour at the Rijksmuseum under the title Rembrandt – Auerbach: Raw Truth from 12 December 2013 to 16 March 2014.

The Rijksmuseum collection has been an inspiration for generations of artists since the museum first opened in 1885. In that same year for example, Vincent van Gogh spent many hours full of admiration for The Jewish Bride, (1665-69) by Rembrandt. Throughout the years, the Rijksmuseum has inspired famous artists in all kinds of ways. For a number of years, the Rijksmuseum has been drawing attention to artists who found their inspiration in the Dutch Masters, with displays such as John Constable & Jacob van Ruisdael (2007), Miro & Jan Steen (2010), Anselm Kiefer & The Night Watch (2011), and Rembrandt & Degas (2011).

Frank Auerbach, Head of E O W II, 1964. Frank Auerbach courtesy Marlborough Fine ArtFrank Auerbach (Berlin, 1931) was sent to Britain in 1939 by his parents, and from 1947 has lived in London. He is considered to be one of the most important British painters since the Second World War, belonging to the same generation as Francis Bacon and Lucian Freud. At the beginning of the 1960s, Auerbach became fascinated by the way in which Rembrandt managed to paint the raw truth and thus penetrate to the essence of his subjects. Auerbach has done the same in his own way in the six paintings from this period that the Rijksmuseum will be displaying:_ Primrose Hill, Spring Sunshine_ (1961-62/1964), The Sitting Room (1964-1965), Head of E.O.W. (1964),_ Head of E.O.W. II_ (1964), Primrose Hill, Summer Sunshine (1964) and Primrose Hill, Winter Sunshine (1962-1964). These works will be displayed opposite Rembrandt’s paintings: The Syndics of the Drapers’ Guild (1662),_ Self-Portrait of the Apostle Paulus_ (1661), The Jewish Bride (1665-69) and Titus dressed as a Monk (1660).

With iron discipline, Auerbach has worked on his paintings at fixed times every week, often for years on end. In a meticulous search for the essence of the subject, he refines the outcome of the previous session time and time again. The result is works with an almost sculptured structure of paint that is reminiscent of Rembrandt’s later works. However, for Auerbach this impasto was not the objective itself; for him it was only a by-product of the search for the raw truth: Good paintings attack fact from an unfamiliar point of view. They’re bound to look genuine and in someway rawly and actively repellent, disturbing and itchy and not right. ‘A Conversation with Frank Auerbach’, Frank Auerbach, exh. cat, Hayward Gallery, London 1978, p. 16